Categories: Weekly Updates
Here is the latest update, Phil G4UDU
This week:
Meeting on the 7th was an outside radio evening that took part at the carpark in Honeysuckle  Lane High Salvington.
Andrew G1VUP with his 2m beam – fighting with the QRM from the local paging transmitter !
Chris with the fibreglass poll and a multi linked dipole – pick the band you want with the connecting clips – using this with the clubs IC-7300
I had an 8m fibreglass fishing pole with a helically wound non resonant wire – easy to tune with the KX3 internal ATU and worked from 60m – 6m – this was mounted above the bed of the truck using the metal as a ground plane.
We all had QSO’s – time limited only by the rain front blowing in that arrived around 9pm.
Last week Graham G4FNL with Peter G4BVH was active on the downs to the East of Ditchling Beacon for the RSGB HF NFD In the “Low power unassisted multi operator portable section”  there used to be just a single event class but they have now generated several different ways of doing the contest to encourage greater participation.  We will have to ask Graham when he is next at a club meeting if he thinks this has been successful – as a participant for many years he has seen all the different sets of contest rules come and go.
Writing this on Saturday morning – remember tomorrow is the PW 2m QRP contest and WADARC will be at the car park on Kithurst Hill to the west of Storrington – please try and help/operate – this coincides with the 2m Backpackers contest to generate extra 2m operators – activity will be using all modes at 5W (up from last years 3W ) to match the BP contests rules.
Access is from a turning off the B2139 – setup is from 0900 on site, if you are helping with the setup, please arrive on time to allow everything to be done with no last minute panics ! 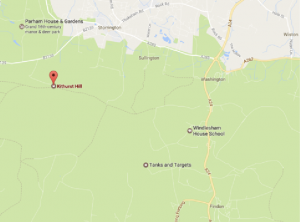 Club Programme:
Please note the important EGM on the next meeting
14th June EGM to discuss possible changes in the club meeting venue to include possible permanent radio facility.
21st June Graham G4FNL with a talk about his recent DX operating visit to Botswana callsign A25UK
28th June Practical evening – please contact a committee member if there is any particular subject/measurement process you would like demonstrated
2nd July Club Breakfast – Lancing Harvester

Club on the air nets, all times local: