Wednesday’s talk and practical demonstration of APRS was by Dorian, 2E0FSI and was well attended. Dorian covered all aspects of the APRS system and there were plenty of questions and discussion from members.

Thanks to our Club President Chris, G3UFS for providing some more of WADARC’s history. All of the offerings so far will be used for a historical article, soon to be published on the club website. Any further club history will be gratefully received, but don’t leave it too long.

AURORAS EXPLODE OVER FINLAND: Earth is entering a stream of solar wind flowing from a sprawling hole in the sun’s atmosphere. First contact with the gaseous material on March 22nd sparked a bright display of auroras over Scandinavia. “The sky literally exploded right above our heads,” says Didier Van Hellemont, who sends this picture from Luosto, Finland: 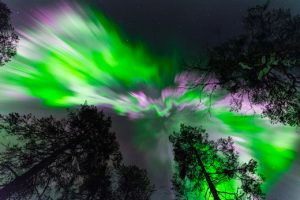 “We enjoyed fine auroras for several hours as we walked through the woods from a snow-covered mountain in northern Finland,” says Van Hellemont. “And I hope there will be more in the nights ahead.”

Indeed there will be. Earth is only in the outskirts of the stream now. Our planet is about to move deeper into the stream where we will experience faster-moving rivulets of solar wind, with speeds exceeding 600 km/s (1.3 million mph). NOAA forecasters estimate a 55% chance of G1-class geomagnetic storms on March 24th and 25th.

At 2332 UTC on March 22 the Australian Space Forecast Centre issued
a geomagnetic disturbance warning for this weekend, March 24 and 25.
“Expect the geomagnetic activity to increase to mostly Active levels
with isolated periods of Minor to Major Storm levels due to a high
speed solar wind stream associated with a negative polarity coronal
hole becoming geo-effective”.

In last week’s report, ARLP011, there were no sunspots over the
reporting week. On March 15 one new sunspot appeared for a sunspot
number of 11, which is the minimum non-zero sunspot number. The
next day it was gone, then a new sunspot appeared March 17. Sunspot
numbers on March 17 and 18 were 15 and 13, then none for the rest of
our reporting week, March 19 to 21. So the average daily sunspot
number increased from 0 over the previous week to 5.6 over the most
recent 7 days, ending Wednesday March 21.

Average daily solar flux over the same two periods increased from
67.7 to 69.3. Geomagnetic indices about doubled, with average
planetary A index changing from 7.1 to 14.4, and mid-latitude A
index increasing from 5.7 to 11.3.

The spring equinox began at 1615 UTC on Tuesday, March 20 in the
Northern Hemisphere. At that moment solar radiation was equally
distributed between the Northern and Southern Hemisphere. Except
for the low solar activity, the beginning of spring should be an
ideal time for worldwide HF communication.

“Geomagnetic field will be:

Conditions have been variable. Last Tuesday saw a small ‘lift’ in conditions and some distant repeaters in the West of the UK were heard whilst out mobile in the Shoreham/Steyning areas. Auroral contacts are also likely this week.

This week’s bulletin was made possible with information provided by
WB0TEV, The Daily DX, the OPDX Bulletin, 425 DX News, DXNL, Contest
Corral from QST and the ARRL Contest Calendar and WA7BNM web sites.
Thanks to all.

GEORGIA, 4L. Mamuka, 4L2M will be QRV in the CQ World Wide WPX SSB
contest as a Single Op on 40 meter entry. QSL via EA7FTR.

MALAWI, 7Q. Members of the EIDX Group will be QRV as 7Q7EI from
March 24 to April 2. Activity will be on 160 to 10 meters using CW,
SSB and RTTY with four stations active. QSL via M0OXO.

CHINA, B. Look for B1Z to be a Multi/Op entry in the CQ World Wide
WPX SSB contest. QSL via EA7FTR.

BAHAMAS, C6. Operators Joe, W8GEX and Janet, W8CAA are QRV as C6ADX
and C6AYL, respectively, from the Exuma Islands, IOTA NA-001, until
March 26. Activity is on 40 to 6 meters using SSB and various
digital modes. QSL direct to home calls.

MOROCCO, CN. A group of operators will be QRV as CN2AA in the CQ
World Wide WPX SSB contest as a Multi/Single entry. QSL via UA2FM.

ISLE OF MAN, GD. Gordon, MM0GOR will be QRV as MD1E in the CQ World
Wide WPX SSB contest. QSL via M0OXO.

THAILAND, HS. A group of operators plan to be QRV as HS0AC in the
CQ World Wide WPX SSB contest as a Multi/2 entry. QSL via HS5NMF.

US VIRGIN ISLANDS, KP2. Operators K1ZE, KE0UI and WA0ROI are QRV as
KP2/home calls from St. Croix. They will also be active as NP2N in
the CQ World Wide WPX SSB contest as a either a Multi 2 or
Multi/Single entry. QSL NP2N to home call and all others to home
calls.

PERU, OA. Special call OC4PS will be QRV from the Pachacamac
Archaeological Sanctuary near Lima on March 23 and 24. Activity
will be on 80 to 10 meters using CW, SSB and various digital modes.
QSL via OA4O.

CAMEROON, TJ. Members of the IDXT are now QRV with new call TJ2TT
until March 29. Activity is on the HF bands. QSL direct to I2YSB.

BELIZE, V3. Victor, WB0TEV is QRV as V31VP from Blackman Eddy until
March 27. Activity is on 80 to 10 meters. This includes being an
entry in the CQ World Wide WPX SSB contest. QSL to home call.

MARSHALL ISLANDS, V7. Nobu, JA0JHQ is QRV as V73NC from Majuro,
IOTA OC-029, until March 26. Activity is on 160 to 10 meters using
mostly SSB and some FT8. This includes being an entry in the CQ
World Wide WPX SSB contest. QSL direct to home call.

BURKINA FASO, XT. Max, DK1MAX is QRV as XT2MAX until April 2.
Activity is on the HF bands and 6 meters using mostly CW and some
FT8. QSL via LoTW.

We now have a fairly full programme of events, including special event stations. Please keep an eye on the website for details and/or changes.